By Darla A. Baker, The Daily Independent

Just over an hour north of Lancaster, and east of Bakersfield, The Naval Air Weapons Station China Lake is home to over 100,000 petroglyphs, or Native American rock art - the largest collection in the western hemisphere. Located inside the base, the 10,000 year-old art covers the walls of Little Petroglyph Canyon.

Hosted by the Ridgecrest Area Convention and Visitors Bureau (RACVB), the Petroglyph Festival returns with a street fair, crafts from Native American artists, tours of Petroglyph Park’s replica petroglyphs, guest speakers, demonstrations, and a full slate of performers on the festival stage.

Previously, the Maturango Museum offered public tours to the petroglyphs, but all tours have been suspended since the 2019 earthquakes and then the pandemic due to their location aboard the Naval Air Weapons Station. Tours will hopefully resume sometime in 2023.

“We are coming out with some great talent featuring the Native American tribes within the area and surrounding valley as well as from out of the area. We have worked hard over the years to keep within the spirit and the intent which is why the foundation exists,” said Matt Zubia, chairman of the Petroglyph Education Foundation.

Through the efforts of keeping the spirit of the festival alive, Zubia said it continues to bring people back to the festival each year as well as encourage more tribes to participate.

A Powwow in the park returned for the 2022 festival, after being part of the first festival in 2014 but not taking place for the past several years.

As the chairman, Zubia said it is his goal to promote what the foundation is about, including the scholarships available by working with the educators around town.

Said Zubia, “We really want to put education back into play which is what the foundation is all about. The foundation works with the RACVB (Ridgecrest Area Convention and Visitor’s Bureau) to produce and manage the festival every year.”

The Petroglyph Festival is a key part of the Petroglyph Education Foundation, created to promote awareness of the significance of Native American history and culture, including the different forms of rock art and communication. The foundation works with schools throughout the Indian Wells Valley using crafts and activities to share the history and culture of local Native Americans. The foundation hopes to connect the past with the future.

The festival, held the first Saturday and Sunday of each November, is located at 100 E. Las Flores Ave. Parking is available in the area.

Volunteers to help run the festival are sought by RACVB. 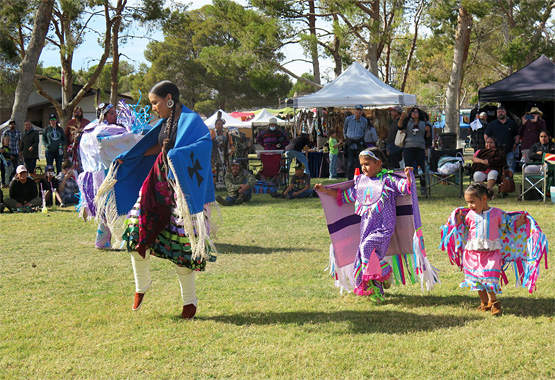 A scene from the powwow at the 2022 Ridgecrest Petroglyph Festival. DAILY INDEPENDENT FILE PHOTO 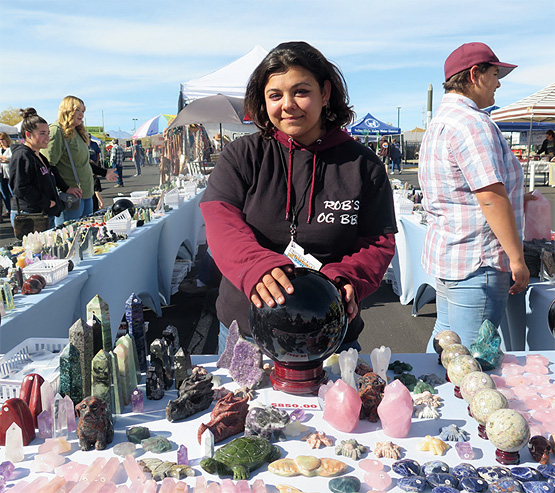