Film historian Marc Wanamaker poses for a picture after his popular talk on female performers in early westerns at the Museum of Western Film History during the 32nd Lone Pine Film Festival Oct. 8, 2022. PHOTO BY JESSICA WESTON

By Darla A. Baker The Daily Independent

The next time you are in Lone Pine, visit the Museum of Western Film History, located at 701 S. Main St. If you are a lover of Western or Sci Fi movies, or movie stars in general, you won’t be disappointed.

The museum is rich in old and new legends of the silver screen, or to be specific, the Western screen.

Gallery exhibits include memorabilia and information gathered from as far back as the silent screen days to the latest releases.

What makes Lone Pine the ideal location for a Museum of Western Film History is the epic landscapes of the region, including Owens Valley, the Alabama Hills, Sierra Nevada and Death Valley.

The landscape has attracted talent and production crews for over 100 years.

According to the museum’s website, “The Museum of Western Film History honors the men and women of the silver screen who interpret the lives of the American Cowboy; the legendary iconic movie and TV heroes and heroines of America’s 19th and 20th centuries. In addition, the museum collects and shares more contemporary movie-making in the regional area of Inyo County, such as sci-fi genres and other cinematic references to the local landscape.”

History of the museum

Founded in 2006, the museum’s curators have since collected, preserved and exhibited a broad and diverse collection of western film memorabilia associated with the American western film genre. Exhibits include film programs and other interpretive projects and displays that highlight the movies filmed there as well as the actors, directors and producers who have used “the landscapes that served as a canvas for their stories.”

Each year, the museum attracts visitors and tourists from around the world as it said to be one of the largest and most significant film history collections in the United States.

To celebrate the productions that continue to be filmed in the area and the featured talent, the museum hosts its annual Lone Pine Film Festival each year in October. The festival is a three-day event chock full of screenings, panels, western authors and Hollywood professional presentations. Festival goers have the opportunity to tour the geographical movie sites where over 400 films and 1,000 commercials The museum is the only one of its kind that chronicles western film history and culture dating back to 1920 when Hollywood first noticed Lone Pine. And, filming of movies and commercials continues to this day.

Most recently, scenes for the Academy Award-winning “Gladiator”, Disney’s “Dinosaur”, “G.I. Jane”, “Maverick” and “The Shadow” were shot in the Alabama Hills. The natural scenery remains unspoiled and unchanged since that first film in 1920, a silent Western for Paramount called “The Round Up” with Fatty Arbuckle.

Great legends have traversed the dirt roads of the Alabama Hills such as John Wayne who appears in 12 movies filmed in the area, Hoot Gibson, Buck Jones and Ken Maynard, as well as Gene Autry and Roy Rogers and Hopalong Cassidy.

In October 1990, the first Lone Pine Film Festival was held to celebrate all this movie history. Roy Rogers returned to Lone Pine to dedicate a permanent historical marker at Movie Road.

According to the museum’s website, “The Los Angeles Times once called the Festival ‘the most focused’ of all the nation’s film conventions because it only shows films made here and it always invites guest stars who worked here.

Each festival highlights guest stars, film historians and stunt actors. Over 30 guided tours of actual movie locations are offered featuring what has become a favorite backdrop for wild west shootouts, sci-fi adventures or that final take of some cowpoke riding off into the sunset.

Note: Although hotel accommodations and campsites are plentiful during most of the year, advance lodging books up fast during the Lone Pine Film Festival days, so plan early. 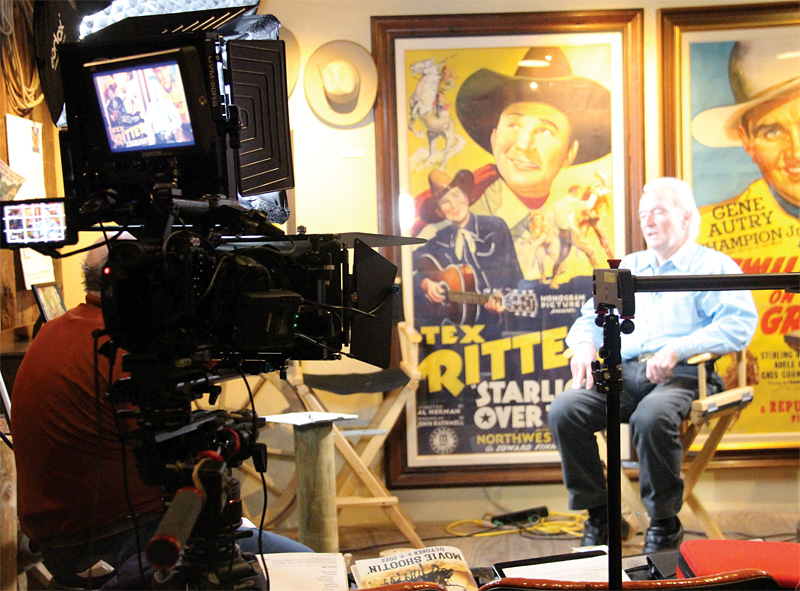 William Wellman Jr. is interviewed on film in the Museum of Western Film History Oct. 8, 2022 as part of the 32nd Lone Pine Film Festival. PHOTO BY JESSICA WESTON