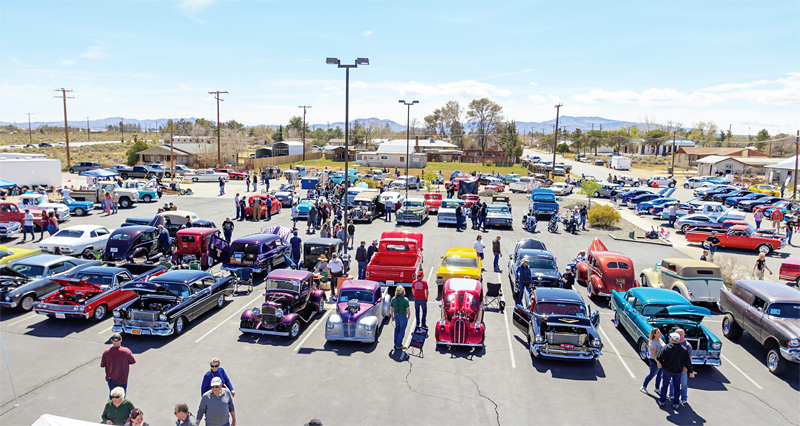 The Classic Car Show that left Inyokern asking for more is returning in 2022 and expected to be even larger than the last.

The car show hosted by Classic Burgers is set for March 12, 2022, after two years of waiting. There will be live music from local bands, craft and home goods vendors, raffle prizes, free wifi available and of course a car show contest.

All ages are welcomed and encouraged to bring any vehicle to the event. To enter, the show asks for a $10 donation to the Ridgecrest Animal Shelter and a gift for the raffles. After March 1, the price will go up to $15.

The project came into fruition through two longtime friends who brought their businesses together to create an event that would involve the community.

Promoter Ms. Kate, who is affectionately known as Crafty Kate, has lived in the Ridgecrest area for more than 30 years. She’s known the owner of Classic Burgers, Abdul Hugais, since he was a child. After he opened the restaurant on West Inyokern Road with plenty of outdoor space for cars, Ms. Kate said she knew as a classic car show promoter, and she wanted to play on the names.

“I thought, Classic Cars? Classic Burgers? We have to do something with that,” Ms. Kate said.

More than 100 cars were showcased during the first event, sponsored by Don and Linda Waldron of Rod’s West. In all, they raised $1,277.50 for the animal shelter.

In 2020, they were expecting about 160 cars and had to back out due to pandemic concerns. The car show was put on hold again in 2021 just to be safe. Now, Classic Burgers is expecting about 200 cars and more resources for guests.

The space and insurance are provided by Classic Burgers.

“Abdul does the insurance, he’s a great kid,” Ms. Kate said. “He’s always giving back to the community.”

All proceeds from the event go to the animal shelter, meaning dozens of volunteers take the time out to help the event run smoothly.

“Everyone volunteers, it’s a group effort,” Ms. Kate said. “The community really gets involved and it brings a lot of attention and visitors to Inyokern.”

Hugais said the first event had a great turnout and has already seen the excitement for its return.

“We had a lot of people coming in from San Diego, Orange County and Bakersfield,” Hugais said. “So we’re expecting an even bigger turnout.”

“It’s fun for the car owners and everyone else who attends,” Ms. Kate said. “It brings people together, so if it has a motor, bring it.”