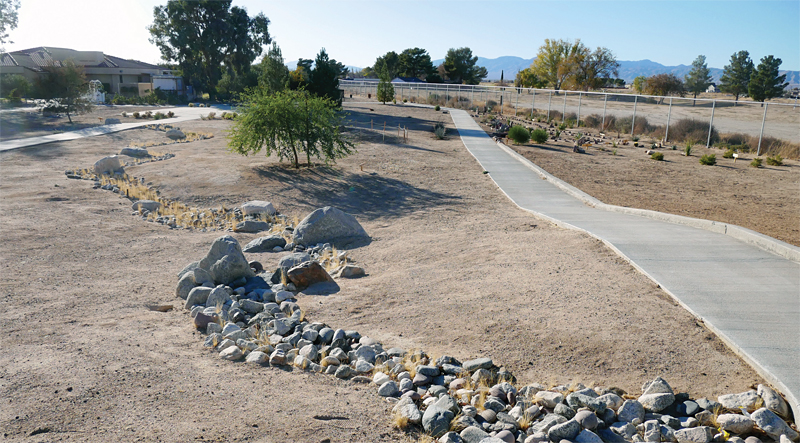 The Inspiration Walk garden in Central Park holds a number of desert native plants meant to educate residents on the variety of flora they can plant. JACK BARNWELL/MOJAVE DESERT NEWS

What started as an Eagle Scout project in partnership with the Desert Rose Garden Club years ago has blossomed an empty spot into a place of inspiration for California City residents to enjoy.

Nestled behind the tennis courts at California City’s Central Park, the Inspiration Walk Garden holds a variety of flora planted by community residents.

“The Garden Club decided to plant what is a remembrance rose garden,” Ann Richardson, the club’s president, said on a recent Monday during a walk through the garden.

The rose garden is one of the first things to greet people as they enter the inspiration walk just to the right of the California City Senior Center.

Stone markers held in place by cement sit near different species of roses, each one marking a loved one who might have passed away or to honor those who are still living. Richardson said people donated $100 in order to have a marker placed in the garden.

The arbor, benches and surrounding fence protecting the garden were part of a 2017 Eagle Scout project.

From there, the idea for the inspiration garden grew. The area it now occupies used to host the old Holiday Village event, but otherwise sat unused, or muddied with puddles following a rain.

Today, dozens of plants from agave cacti and artemisia to Afghan Pine and Desert Willow tree grow from the ground.

According to Richardson, more than 40 people participated in the planting of the garden in the past. River stones were provided to line the walkways and circle certain plots, while the city helped grade the area.

“Bless their hearts, the city has been so cooperative and willing to help create this space,” she said. “They came in with backhoe and cleared the entire dry wash and dug 150 holes .... without the city this wouldn’t have happened.”

“The Garden Club tries to make a community effort out of this project,” Richardson said.

Richardson said one of her goals includes one-day holding tours.

The current pandemic guidelines gripping the state prevent that at the moment, but Richardson is looking down the road.

Most of the plants on the path have labels associated with the type of desert plant growing in the garden.

“All of the plants in the Inspiration Walk, with the exception of the roses, are desert plants and drought-tolerant,” Richardson said. “The reason why I want to give tours is that there is so much to teach the public — some of these plants are available at stores or garden centers and some of them are down in Lancaster.”

She added Inspiration Walk at its heart is “a display garden for educational purposes ... to show the public that desert plants can be very ornamental and can be planted in their front yard.”

Richardson noted some of the plants in the garden will have long term benefits, such as the trees.

“As the trees mature, they will eventually provide shade,” she said, pointing out the blazing summer weather Cal City endures.

A lot of the plants and flowers in the garden tend to attract wildlife and birds such as hummingbirds, as well as some of the fowl that make use of Central Park’s lake.

An addition planned for the future will include a mural created by artist Terri Lucy of the California City Arts Commission. The mural will grace the back wall of the racquetball court and will feature a landscape scene.

According to Richardson, Lucy has already created a mock-up of the scene. However, the eventual creation of the mural is pending supplies such as paint, as well as the appropriate time to start painting. Richardson said the goal is to eventually include the community in its creation.

Other future ideas, which Richardson said are only hopes at the moment, include a gazebo to allow people to sit and host events.

“Plans and ideas always change, and when you make a plan it can’t be in cement because that the way the world is,” Richardson said.

A recent addition to the garden includes a future community garden established by Shauna Royten. Three plots have already been built and await planting. The community garden would help inspire food security and teach about self-sustainability. An extension of that will include creating a local farmers market to provide a source of local fresh produce, goods and products.

Currently, a workday for the community garden is set for the last Saturday of each month between 9 a.m. and 11 a.m.